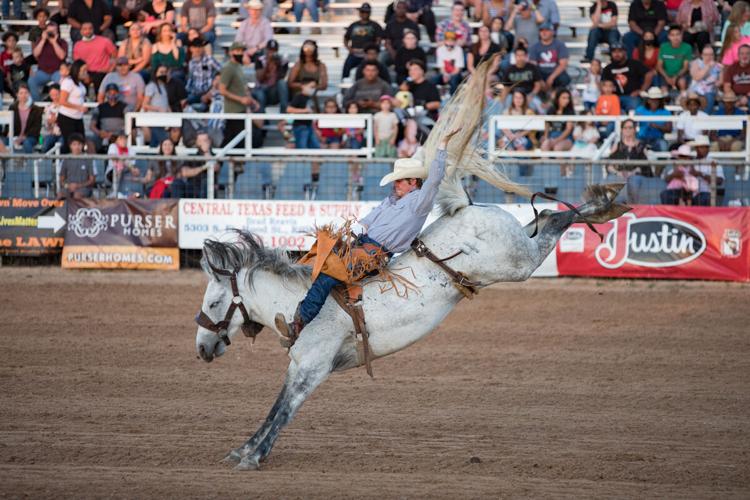 “It was humbling, it was incredible, and it was a great characterization of Texas — everything I had imagined it to be.”

That was how Maj. Gen. Michael Keating, the new deputy commander for support (U.K.) of III Corps and Fort Hood, described his first ever rodeo experience.

“There’s just nothing like this (where I’m from), and it has just been mind-blowing,” Keating stated.

On May 20, the 74th Annual Professional Rodeo Cowboys Association Rodeo in Killeen hosted its military appreciation night, and Keating, as well as other Fort Hood military members, were in attendance.

Along with receiving free entry into the event with a military identification card, military and other attendees were treated to a special demonstration by the 1st Cavalry Horse Detachment.

The detachment, an all-volunteer organization, is a ceremonial and recruitment unit dedicated to preserving the 1st Cavalry Division’s equestrian heritage. They train with firearms and sabers, wear traditional 1st Cavalry Division uniforms during their performances, and demonstrate traditional mounted drills and ceremonies, including marksmanship and saber skills. It was these skills that were demonstrated to the crowd during the rodeo.

“I gotta be honest with you, I’m super pumped to be here tonight,” Brig. Gen. Brett Sylvia, 1st Cav. Div. acting commanding general remarked as he addressed the rodeo attendees while on horseback. “The first reason is we get to display our cavalry tradition; you saw the Horse Cavalry Detachment display their stuff in awesome fashion. And now you get to see a general officer try to stay on this (darn) horse!”

While the Killeen rodeo ended on Saturday, the PRCA will be hosting another rodeo event July 1-3 at the Bell County Expo center in Belton.

CHECK OUT THE ORIGINAL STORY HERE

We went down the lane, by the body of the man in black, sodden now from the overnight hail, and broke into the woods at the foot of the hill. We pushed through these towards the railway without meeting a soul. The woods across the line were but the scarred and blackened ruins of woods.

Facebook Twitter Pinterest LinkedIn [FROM 2021] If you’re looking for something fun to do this weekend, check out the 74th annual Rodeo Killeen. Though it started Thursday, entertainment continues until Saturday night! The rodeo will...
Read more
May 20, 2017

Facebook Twitter Pinterest LinkedIn [FROM 2017] Tie-down roper Jake Pratt was two-for-two on Friday, winning the Redding (Calif.) Rodeo and splitting for the lead at Rodeo Killeen (Texas). Pratt was the first up for slack...
Read more
May 24, 2014

Killeen’s Parrish does well in barrel race at Rodeo Killeen

Facebook Twitter Pinterest LinkedIn[FROM 2014] Killeen’s own Shelbie Parrish competed in the barrel racing event at the Rodeo Killeen on Saturday night and more than held her own. Parrish finished under a second behind the...
Read more