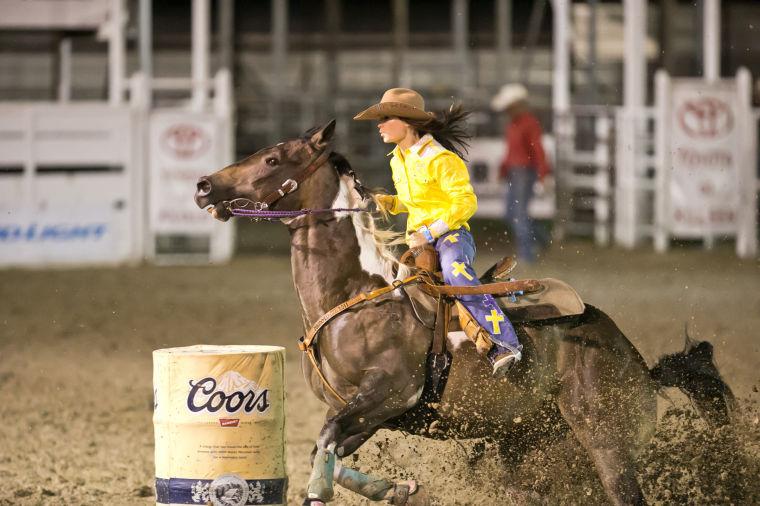 Killeen’s own Shelbie Parrish competed in the barrel racing event at the Rodeo Killeen on Saturday night and more than held her own.

Parrish finished under a second behind the leader’s time. But all things considered, that was a strong performance. The leader’s time was set in dry conditions on Friday night. Parrish had to race on a wet, muddy surface on Saturday.

“My horse is so young, so I really didn’t want to push him too much in these extra-sloshy conditions,” Parrish said. “So the racing part didn’t go as planned. But, overall, it was a great time and I’m very grateful that I had so many people in the crowd supporting me.”

Besides competing in the WPRCA, Parrish, 20, also rides for Tarleton State University.

She captured first place earlier this month in Bridgeport and earned over $1,700.

“But what is really special about Shelbie is she feels the talent that she had was given to her by God,” said her father Bubba Parrish, also of Killeen. “So, no matter how well she rides, she always gives a percentage to a foundation that will help a child in need of assistance. For instance, tonight she was riding for a little boy with brittle bone disease. She feels with the talent the Lord has provided her with, she’d like to help provide for others.”

CHECK OUT THE ORGINAL STORY HERE

We went down the lane, by the body of the man in black, sodden now from the overnight hail, and broke into the woods at the foot of the hill. We pushed through these towards the railway without meeting a soul. The woods across the line were but the scarred and blackened ruins of woods.

Facebook Twitter Pinterest LinkedIn[FROM 2021] “It was humbling, it was incredible, and it was a great characterization of Texas — everything I had imagined it to be.” That was how Maj. Gen. Michael Keating, the...
Read more
May 21, 2021

Facebook Twitter Pinterest LinkedIn [FROM 2021] If you’re looking for something fun to do this weekend, check out the 74th annual Rodeo Killeen. Though it started Thursday, entertainment continues until Saturday night! The rodeo will...
Read more
May 20, 2017

Facebook Twitter Pinterest LinkedIn [FROM 2017] Tie-down roper Jake Pratt was two-for-two on Friday, winning the Redding (Calif.) Rodeo and splitting for the lead at Rodeo Killeen (Texas). Pratt was the first up for slack...
Read more